It's a French scoop as UT2 emerges 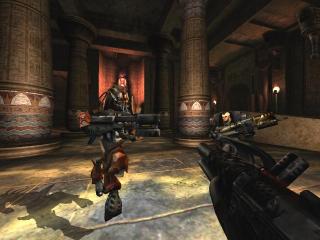 The article confirms that the game is being developed by Digital Extremes, and is being made in tandem with the Xbox Unreal game, Unreal Championship.

Here are some other bits of info gleaned from the French transcript: There will be operable vehicles, rockets will distort smoke when fired through it, Water borne objects and swimmers will leave ripples to denote their direction of travel. There will be some radiosity for dynamic lighting, and a new and highly sophisticated skeletal animation system combined with a new math engine that will enable characters to behave in a more human way. For example, characters will not fall in the same way over and over again.

There will be six races in the game including Egyptians, and genetically enhanced humans called Juggernauts, with 26 character models as standard. At this time, 30 maps are expected to be included.

The possibility of linking-up the PS2 and Xbox games was not confirmed.
Companies: Digital Extremes Infogrames
Games: Unreal Tournament