It's going to be a packed New Year. 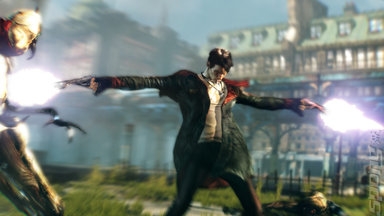 This is getting ridiculous. Capcom has announced the release date for its Devil May Cry reboot, DmC, and anybody looking forward to some Christmas slaying is going to be disappointed. The game will hit US stores on January 15th 2013. There'll be no games to cover this Autumn at this rate!

The Japanese franchise has been handed over to Enslaved developer Ninja Theory, and features a completely revamped Dante tackling a series of underworld creatures. Capcom is expecting global sales of 2 million units for the game, but it all depends on whether gamers can get past the extravagant design changes.

Initial response from fans and the general populace have been rather mixed, calling the poor chap 'emoDante'. A pretty dangerous accusation to make, in the absence of any toxic evidence like My Chemical Romance albums. He does wield blades though. Hm.

A European release wasn't announced, but we'd hazard a guess that it'll either be really close to the US date (due to Ninja Theory's UK location and the globalisation of the games industry at large) or about fifteen months after (just to take the piss).
Companies: Capcom
Games: DmC: Devil May Cry