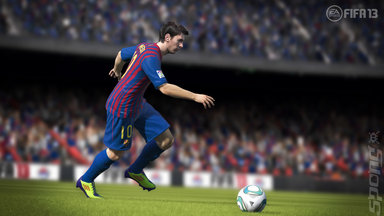 Sometimes, as with EA versus Activision or Britain's Got Talent vs The Voice, it can become a little difficult to differentiate between video games companies and TV shows. Frankly, though we think that ancient and some might say "Epic" or "Mythical"battle between EA's FIFA series and Konami's PES beats them all... this week's Episiode: "FIFA talks PES".

Yes, EA FIFA's admittedly always fun and informative Dave Rutter talks about the ongoing threat from Konami... going forward as it were.

Dave does not think that (on the day) "there's anyone on our team that's complacent. We are hugely critical of ourselves to the extent where we get in trouble for it when we're doing presentations. I know Andrew (Wilson) and before him Peter Moore would always say, 'don't be so hard on yourselves, you've got to tell some good news too.'"

Nasty Aaron! So, what of the threat in the box? "We're still worried about what Konami is going to do with Pro Evolution Soccer and naturally they're our closest sports competitor. But then there are other games out there too that are phenomenally successful like Call of Duty and all the other big games that people want to play."