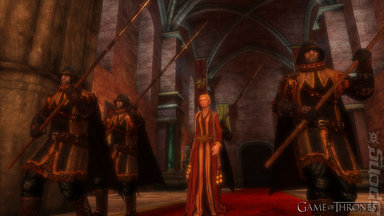 Winter is Coming. No wait, hang on a minute. That's wrong. Summer is coming, and for Game of Thrones fans everywhere that's going to be the season to keep an eye on, as an officially licensed RPG will be landing in the UK in June 2012.

A "Behind the Wall" documentary trailer, featuring developers from French studio Cyanide, has been released to show off just what players can expect to see in this spinoff adventure. Author of the Game of Thrones "A Song of Ice and Fire" series, George R.R. Martin, has offered creative input to the story to ensure everything is as authentic as possible.

The game focuses on Sworn Brother of the Night's Watch, Mors, and Red Priest Alester as they travel to familiar locations such as The Wall and King's Landing and play their part in the unravelling canon. Combat and dialogue-based situations are all promised, along with extensive skill trees and abilities.

Watch the trailer below. Game of Thrones is coming to PS3, Xbox 360 and PC.