Avengers Assemble on Kinect and WiiU 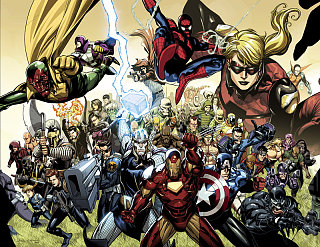 Marvel Comics' Secret Invasion
Ubisoft and Marvel have announced that they're bringing the Avengers to Kinect and the Wii U the Autumn. Yes. Kinect and Wii U. No mention of the PS3 or any handhelds in there.

Dubbed Avengers: Battle for Earth, the game will be based on Secret Invasion, a story written by Brian Michael Bendis, drawn by Leinil Francis Yu and released through 2008-2009. In it, shape-shifting skrulls (they were in the film, but called the Chitauri) had infiltrated various organisations and super-teams and were rocking multiple super-powers based on those of Marvel heroes.

The game is in development at Ubisoft Quebec.

While the game's not specifically based on the film, the announcement does note that it will feature Captain America, Iron Man, Thor and the Hulk. No mention of Spider-Man and Wolverine, who have been Avengers mainstays in the comics for the last few years but are currently licensed out to Activision.

SEGA produced games based on the Iron Man, Thor and Captain America films that led up to the Avengers film, but they weren't up to much. Footage of an in-progress Avengers game from THQ leaked last year, but the game was never announced.

"The idea that we're making a motion-control version of 'The Avengers' is a unique proposition if you compare that to superhero games of the past," Tony Key, Ubisoft's VP of sales and marketing, told The AP. "This is the perfect type of game for that because these characters are very action oriented. They're always fighting and throwing things."

The counter-argument might be that this isn't the perfect type of game for the Avengers because we're yet to see a convincing method of navigating an environment using Kinect, but we don't want to judge a game based purely on its announcement.

It's certainly a coup for Ubisoft.
Companies: Marvel Ubisoft

Anyone remember that amazing Natal trailer? Those were the days. There's not even been one decent driving game for it, or proper sports (I hear PGA is hit and miss, literately).

Where it MAY work is by just adding voice control, like Skyrim or ME3.

It's a shame as a proper Marvel game could be a ton of fun. I'm thinking multiplayer and Prototype style.