BioShock: Infinite Delay Down to Multiplayer or GTA V?

A job listing causes what might be an Irrational rumour. Speculation fires GTA V guesses 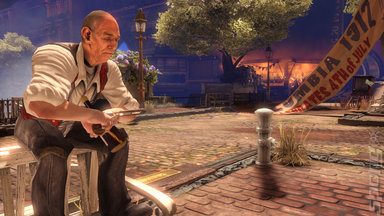 "Boo!" We all said to the news that BioShock Infinite was being delayed. Although we were all pleased that this, according to Irrational's Ken Levine, was down to making the game the best it could be. But then... rumours began. So, we're reporting them.

First up, the multiplayer element. This derives from an advert for a "Network Programmer" for Irrational Games. This lays out the following: "POSITION OVERVIEW: The BioShock Infinite team bets big on everything we do -- we strive to be careful about the problems we tackle, innovative in our approach, solid in our implementation, and we polish the heck out of everything we do. Networking is no exception.

"Right now we're looking for an talented and experience individual to help us with the networking aspects of BioShock Infinite. This position will require a combination of initiative, leadership, design, coding, and daily problem solving on multiple target platforms.

"If you have the skills and passion for world-class network-connected experiences like BioShock then why not come join a team that has the track record, the autonomy, and the time to do it right?"

All sounds likely, right? Well there is also, "Work with the team who created BioShock network code... Extending and enhancing Unreal Engine 3 with proprietary networking tech to address gameplay, performance, platform, production, tools, and QA needs." Still not entirely convinced? What about, "Responsible for delivering a robust, scalable, and responsive client-side networking support on the PC, PS3, and Xbox 360 platforms"?

As for the GTA V thing. Basically, 2K Games is publishing Bioshock: Infinite. Take 2 is publishing GTA V. Take 2 owns 2K. There is only so much marketing budget available. Yup, that one is pure speculation on my part.