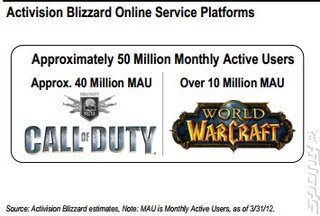 Activision/Blizzard has released its figures for 2011/2012 in terms of money and users (who are basically money). It's doing very well thank you.

High up the figures is this one: The combined total of the Call of Duty and World of Warcraft series Monthly Active Users is approximately 50 Million. That's 40 Million MAU for CoD and "Over 10 Million MAU for WoW".

Whichever way you cut it, that is a lot of people. Active people. The kind of people who spend money. That's impressive.

Having covered the hardcore, surely the company must have messed up the casual? "Skylanders Spyro?s Adventure was #1 Kids Video Game for First Quarter 2012 with 30+ Million Toys Sold Life to Date Through 3/31/12" says Activision. So, that's a "No, it didn't mess up" then.

So, you would expect this to mean that the company made made some money in the 1st Quarter (to March 31st 2012)? Maybe not.

So, using either Generally accepted accounting principles (GAAP) or not, the period from the holidays until Easter were not as good this year as last. What does CEO Robert Kotick say?

"Our better-than-expected first-quarter performance was driven by global consumer demand for Activision Publishing's Call of Duty: Modern Warfare 3, and Skylanders Spyro's Adventures, as well as Blizzard Entertainment's World of Warcraft which remains the #1 subscription-based MMORPG in the world," oh right. Anything else Bobby?

"Additionally, Activision Publishing's Call of Duty Elite service continues to grow and currently has more than 10 million registered users including more than two million annual premium members, an increase of approximately 33% from January 31, 2012.

"On May 15 Blizzard Entertainment will release the highly anticipated Diablo III and we are proud to report that pre-orders for the game worldwide have set a new record for Blizzard.

"For the remainder of 2012 and beyond, our product pipeline includes some of the most innovative games we have ever developed for our established franchises, including Blizzard Entertainment's World of Warcraft: Mists of Pandaria?, StarCraft II: Heart of the Swarm and all new MMORPG game, as well as Activision Publishing's Skylander's Giants, Call of Duty: Black Ops 2 and a new universe from Bungie.

"We also continue to expand our service platforms, Blizzard Entertainment's Battle.net and Activision Publishing's Call of Duty Elite, grow our global footprint into new markets and strengthen our development resources for the future. Our high-quality brands, industry leading operational capabilities and solid balance sheet should enable us to continue to take full advantage of the opportunities afforded by the expanding interactive entertainment market and deliver continued superior returns to our shareholders."