"I'd like to thank the Academy." The Mutants are at it again.

Plus, most corporate droning quote ever inside! 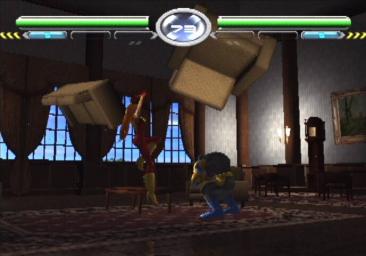 All Images (3) »
Activision has released the first screens from its latest beat-em-up based on Marvel?s X-Men characters. The game, titles X-Men: The Next Dimension, will be produced for Xbox, PlayStation 2 and GameCube.

The story begins when Bastion, leader of Operation Zero Tolerance, has captured Forge in his attempt to irradicate the Mutants from the face of the Earth. The player must take on Bastion?s Prime Sentinels and defeat them in combat before he has a chance to extract from Forge the secret that could destroy all Mutants.

Taking note of the Dead or Alive series, the game will feature non-arena based, multi-level fighting with destructible levels. A 3D fighter in the truest sense, Activision has incorporated eight-way aerial combat into the game engine, a first in the genre.

And now for that quote: When you want to know exactly what a game will entail, who better to ask than legendary gaming God Larry Goldberg, Vice President of Activision Worldwide Studios. ?The popularity of the X-Men continues to grow with each incarnation of their mutant adventures. The advanced technology of these next gen systems will allow us to give gamers faster action, more varied and expansive environments and characters that look better than ever before.? Thanks for that Larry, you have obviously been elbows deep in overseeing the development of this one.

Anyway, enjoy these snaps from the PlayStation 2 version. The final game, developed by Paradox Development, should be available on all the above formats for Summer 2002.