He could be working on a new game after Dream Drop Distance..! 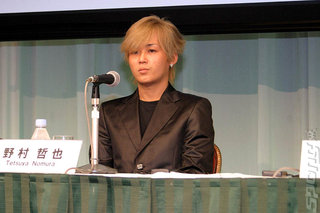 Watch out! Tetsuya Nomura is saying stuff again! The Square Enix producer should, by all rights, be keeping his head down to ensure that Final Fantasy Versus XIII is finished (it has been six years since the game's announcement, after all). But instead, he's teasing the world about a brand new Kingdom Hearts game. What!?

In an interview with GameInformer, the charismatic developer revealed his interest in creating an HD Collection of previous console Kingdom Hearts games - "I do have an interest in HD versions, and I?m currently researching them. If it is possible, I would like to do something about the series being spread over so many different consoles, too. I am thinking a lot about the future."

He then not only admits that a new Kingdom Hearts game should be on a home console platform - the last few titles have seen handheld releases - but he points towards a massive teaser at the end of upcoming 3DS game Dream Drop Distance as to the existence of such a project.

"The PS Vita is definitely a powerful device that is very interesting, but because of it?s high power, there isn?t much of a difference with a console. So even if we were to make a game, we would have to be very careful about how to create it for that device. I also feel that it?s about time that Kingdom Hearts should go back to being on a console... you may be able to find a hint if you play through Dream Drop Distance to the very end."

You mega-tease, Nomura-san. Now, get back to Final Fantasy Versus XIII!

I will admit though, I'd buy Kingdom Hearts HD Collection in a heartbeat