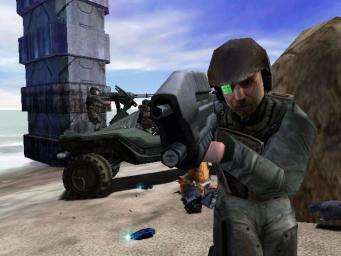 All Images (11) »
Halo has caused quite a stir since Microsoft first showed it in early 2001. Both elegant and stylish, the game received glowing reviews from the world?s press, even squeezing a perfect 10 out of Edge magazine, an honour previously reserved for the likes of Mario 64 and Zelda.

Halo is an online multi-player first person shooter, most akin to the likes of Unreal Tournament or Quake 3.

Taking its cue from Valve?s Half-Life, Bungie has squeezed as much narrative as is possible into Halo. The story takes place well off into the future when, to everyone?s surprise and annoyance, a race of aliens has decided to wage war against us happy-go-lucky humans. Known as the Covenant, the race goes around sapping the life force out of entire planets to fuel their ongoing quest for intergalactic supremacy.

As the main alien convoy draws nearer to Earth, our elite forces go out to intercept and hopefully destroy the invaders. When battle commences the Covenant completely hammer us, wiping out all but one of our ships. Using a move learned from the humble lapwing, the captain of the remaining ship jumps to hyperspace in an attempt to lure the alien nasties away from our planet. It works and the crew of the Pillar of Autumn find themselves coming to rest in deep space in a system filled by an enormous gas giant, its moon and ring construct that it about 10,000 miles in diameter.

By means best known to themselves, the Covenant have managed to guess where the Earth ship was headed and the entire fleet of scummer aliens is waiting for the earthlings. The future sounds bad doesn?t it?

The game starts with the ship being abandoned and all crew leaving for the ring construct, or Halo, in hope that the Covenant will carry on pursuing the vessel.

There are five or so types of highly sophisticated AI driven enemies. The lowest of these is the Grunts. As their name suggests, Grunts are not the most glamorous of alien and run around in packs, hiding and attacking at opportune moments. The Elites are the mainstay of the Covenant attacking force. They come with several variations and can cloak themselves to avoid detection. These team up with several variants of Hunter class enemy and Jackals to form a formidable alien army.

There is massive weapon variety in Halo, with usable weapons taken from both the human and the alien forces. Human weapons include all the usual FPS arsenal like sniper rifles, shotguns and rocket launchers. Alien death-hardware is slightly more interesting. It would appear that over the next few centuries, humanity?s weaponry innovation growth curve has amazingly flattened out where as our outerspace counterparts have come up with all kinds of clever death machines, most of which involve the unpleasant process of plasma restructuring. Nasty!

Bungie has forbidden the use of multiple weapons and has strictly limited the amount of ammunition you are able to carry. This is to stop you from scouring the earlier, easier levels and tooling up for future conflicts. Bungie is keen to point out that in completing Halo, you will fire over four million rounds. Sounds good to us.

One of the most pleasing elements in Halo is the vehicular action open to you as a player. The vehicles, like the space-jeep, are finely crafted and have an excellent, natural feeling control system. The level of realism and sense of freedom is also massively enhanced by the inclusion of vehicles capable of long distance travel and mass-destruction. Some levels require the use of a huge tank to progress through the game, meaning that players must become proficient in controlling it before the next stage can be reached.

Halo is multiplayer gaming taken to the next level. Bungie will admit that the development team has borrowed heavily from the likes of Perfect Dark and Unreal, but that is how game genres expand and improve. Halo comes brilliantly equipped with a co-operative mode that enables two players to romp through the single player game. This is done using a screen split with the promised link-up co-op mode being left out due to development time constraints. Playing cooperatively brings a whole new set of strategies to Halo. Entrapment of enemies and mini-pincer movements are now possible which give the player a real feeling of absorption. When in control of the vehicles, one player drives and the other fires the weapon. Mmmm!

Multiplayer deathmatch can also be enjoyed, either using one console with a four-way split screen, or up to four Xbox machines together with four players playing on each. You would need a lot of cash and a huge living room, but the possibility is there.

Halo is also online equipped as standard. It runs on the Xbox, which is broadband enabled. This is most definitely good news. Fast connection remote multiplayer gaming, mixed with mini-LAN capabilities make Halo an awesome collective experience.

Famously, Linux devotees made an online gaming hub to enable Halo to be played online, before Microsoft had implemented the official Internet play infrastructure in the United States. This pays testament to just how good this game is.

It?s a killer app in the truest sense of the word and Microsoft glows with pride at the prospect of publishing the game, arguably the best, for its debut gaming console.

Halo will be a launch title for Xbox when it is released into Europe on March 14th 2002.
Companies: Bungie Microsoft
Games: Halo: Combat Evolved