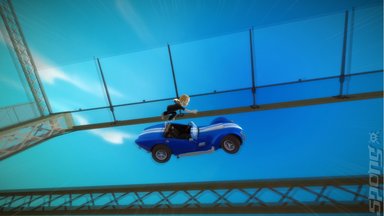 Microsoft has chosen today to announce that a sequel to Kinect Joy Ride is in the works. But, in an interesting twist, the game will actually drop support for the motion sensor.

Joy Ride Turbo will rely instead of traditional controller input when the game is released in "just a few weeks" time. BigPark Studio, the developer of the previous title, has been working on the sequel, set for exclusive release on Xbox Live Arcade.

Despite the lack of Kinect, the game will remain faithful to the original in every other aspect, including the cartoony graphics and the emphasis on Xbox Avatars as racing characters. The press release mentions a few new modes and features, including a Stunt Park where "you can jump off cliffs, shoot out of a cannon, and more."

"Race your way through stunning new tracks, old favorites and 3 modes of play: Battle Race, Pro Race and Time Trial," the blurb details. "Challenge family & friends to local four-player split-screen or race up to eight on Xbox Live. With Joy Ride Turbo, everyone?s in the driver?s seat in this whacky kart racing action."

Quite what this move means for Microsoft's camera peripheral remains to be seen - the original Joy Ride was marketed as a strong asset to the Kinect launch lineup as an example of its motion-sensing capabilities.
Companies: Microsoft
Games: Joy Ride Turbo Kinect Joy Ride