Well, it debuts at #1 and has fans squeeee'ing about it. 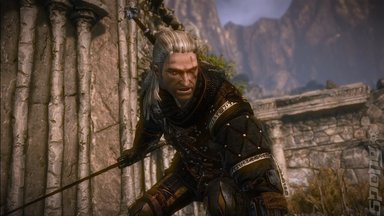 "Have at you Sir Damon of Albarn!"
Well blinking done to CD Projekt and Namco Bandai who have managed to get the Witcher 2: Enhanced Edition to the top of the UK All Formats video game charts as supplied by Gfk Chart-Track.

Yes, there it is as #1 beating golf and soccer games from EA as well as FPSs from EA and ActiBlizz; and a Sci-Fi soap from... EA, and, oh yes, two games not from EA or ActiBlizz: one from SEGA (and Nintendo) and one from Bethesda which is seen as the Rolling Oasis to The Witcher 2's Fab Blur. Or something like that. And let's not forget an appalling movie franchise cash-in.

So, yes, well done to CD Projekt and Namco Bandai.

Check out the top 10