If you're not CoD or Halo, forget about it. 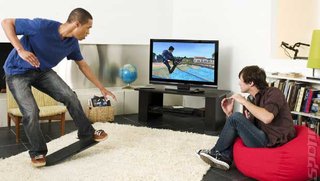 Yes!
Skating. It's 'gnarly' and 'radical' and all that. Especially in the eyes of über-gnarly-bodacious trickster Tony Hawk, who is also famous for leading development of his Pro Skater video games - but in a recent interview he says that gamers aren't feeling it.

"The skate genre is almost nonexistent," Hawk said. "If you're not a first-person shooter at this point you're kind of struggling. If you're not Call of Duty, you're not Halo, it's super tricky out there." Even in despair, he still uses most triumphant vocabulary. Respect, dawg.

"When our game was hitting really hard there were roughly 10-15 top games that were go-tos. Now there are only three or four that are the standard," he added. He's now promoting his new game, Tony Hawk's Pro Skater HD, which is set for digital release.

The Tony Hawk Skater series fell hard when it fell out of fashion with consumers in 2010, along with fellow Activision brand Guitar Hero. The last release was the disappointing Shred, a sequel to the shark-jumping peripheral-based Ride. But he'd still like to be pushing the console barrier.

"I would love to still be here and take advantage of new consoles as they come," Hawk said, "including Wii-U and whatever else they have in the pipe."