First look here and here only! 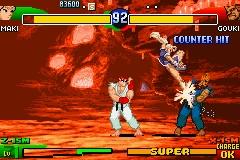 Maki
All Images (3) »
Crawfish Interactive and the nice people at Ubi Soft have sent us the first screens of the three new characters in the Game Boy Advance version of the seminal beat-em-up, Street Fighter Alpha 3.

As you can see, all characters are depicted in Dramatic Battles running in what appears to be a completed version of the game.

Due for launch around April next year, this latest bit of exclusive Capcom goodness should warm the Yuletide cockles of all fans of the series.