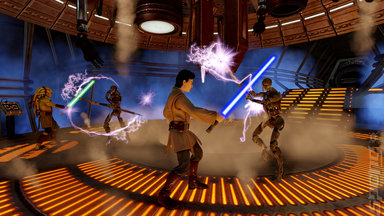 Kinect Star Wars proves this week that big-name brands can overcome an uncertain retail period in the games industry, as the Microsoft-developed family title debuts at the top of the UK Video Game Chart.

Despite critics the world over panning the game, it becomes the first made for the Xbox 360 motion-detecting peripheral to claim the #1 spot in the UK software chart. Whether this marks a notable market acceptance of Kinect remains to be seen - Kinect Rush: A Disney Pixar Adventure fares much worse in its first week at #32.

That's really the only thing that's happening in the UK Top 10 this week, with no major drops or changes in the chart. Things have most just been shuffled about a bit, with Skyrim re-entering at #10. EA still claim ownership of the majority of the chart.

Whew. We wrote all that without a Star Wars reference, too. Impressive, eh? Most impressive.

Here's that Top 10, courtesy of Chart-Track.