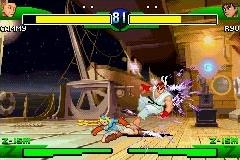 All Images (5) »
We have had the ear of Crawfish?s Director of Development Mike Merron, who has given us the full rundown on the development of Street Fighter Alpha 3 for Game Boy Advance.

First up, there will be three new characters in the GBA version of the archetypal 2D fighter. The Dreamcast game featured 34, whereas Crawfish?s enhanced portable version will contain an unbelievable 37!

The game is essentially a port of the Dreamcast code, an impressive feat in itself. Each character will use around 400 frames per character, with all combo-related animation sequences from the original being left in. This will mean that the game will feel completely natural to veteran players, with all combos left executable as per the original.

All modes from the Dreamcast game have been included, apart from the World Tour mode. There simply was not enough space left on the 8-Meg cartridge to squeeze it in. The only thing that will be left out from the DC game is a couple of backgrounds.

Link-up play will require two cartridges. Before you huff and puff about GBA profiteering, two carts are necessary due to the compression rate at which the game has been produced. SF Alpha 3 decompresses data on the fly as the game is in play. The Game Boy Advance cart simply doesn?t have enough oomph to do this into two consoles from one cart. Dramatic battle will be included, but for one player only.

The game is now in its final beta bug test and is expected to be submitted to Nintendo within 30 days, far sooner than was originally projected when the game was unveiled at the Tokyo Game Show earlier this year.

In related and somewhat astounding news, it was confirmed that a portable version of Capcom Vs SNK 2 is being discussed, for possible development at Crawfish. Capcom Japan have spoken to the UK handheld super-developer about the feasibility of the project but, due to uncertain issues surrounding the use and costings of SNK characters, it has been shelved for the time being.
Companies: Capcom Crawfish
Games: Street Fighter Alpha 3