Dress Up as Commander Shepard in Final Fantasy XIII-2

You got your Mass Effect in my Final Fantasy! 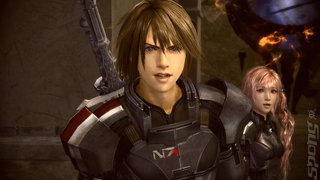 Japanese RPGs or Western RPGs? Put aside your petty differences, gamers, because now you can enjoy both at the same time. Sort of. Square Enix has announced that it will be bringing some Mass Effect fashion into Final Fantasy XIII-2, with Serah and Noel getting N7 Armour as DLC this week.

The costume packs were released onto Xbox Live Marketplace and PlayStation Store earlier this week, but Square Enix has just got around to showering us with some lovely screenshots of the JRPG characters doing their thing, Normandy-style.

For PlayStation 3 users, you'll have to pay Ł1.59 for each costume. On Xbox 360, you'll be paying 240 Microsoft Points a piece. Watch the trailer below to get an idea of just how Shepard's legacy can help you when time-travelling through the ages.