But what of ModNation Racers? 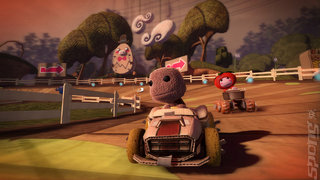 LittleBigPlanet Karting is a reality. Media Molecule and United Front Games made the game's existence official yesterday on the PlayStation Blog, along with a nice little trailer to show off the next stage in the 'Play.Create.Share' franchise's evolution.

The PlayStation 3 title was leaked over a month ago, thanks to a Canadian retailer getting over-excited at its reveal at an industry event. Future Shop also spilled the beans on re-animated True Crime project, Sleeping Dogs.

United Front Games, who also developed ModNation Racers, is handling the production of LittleBigPlanet Karting. The studio said of the game, "Our goal has been fairly simple ? provide a fast-paced experience that captures the best of classic Karting gameplay, married with the unbridled creativity of LBP. This new adventure will be accessible to players of all ages and have all of the variety necessary to satisfy both the hardcore and more casual players."

Of course creation tools and various other LBP features are features too. The question this announcement really raises, of course, is what's going to happen to the ModNation Racers franchise? Time will tell if UFG will drop it in favour of supporting Media Molecule's IP.

irritant 23 Mar 2012 12:55
1/2
Wow. I really would have thought they'd hold off until it was past the "looks like a homebrew Mario Kart ripoff" stage before showing this.

Creating track in ModNation was fun for a while, but I tired of it (found it a bit too clunky). The number of excellent LBP levels out there indicated a near never-ending supply of brilliant UGC tracks. Am definitely chalking this one up as "want"