Grasshopper: We're Thinking of a Shadows of the Damned Sequel

EA will "probably" back it as well. 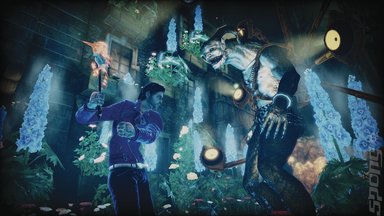 Shadows of the Damned got a bit of a commercial kicking when it was released last year, but if comments from Grasshopper Manufacture composer Akira Yamaoka is anything to go by, there will be a sequel made. And it will "probably" be backed by EA again.

In an interview with the sound director, who has also had an extensive career composing soundtracks for Konami games, it was revealed that there is hope for a follow-up, despite Goichi 'SUDA51' Suda's reported disappointment at the original game's performance at retail.

"I'm thinking of a sequel, actually," said Yamaoka. "I can't tell you here, but clearly I'd like to." He added that EA would "probably" consider backing any potential Shadows of the Damned sequel, before saying, "Well, yes."

Shadows of the Damned sold 24,000 units in its first month on sale in the US, and 9145 units in Japan during its debut week. In the UK, it entered the Video Game Chart at #31. It's good to see that, despite the difficulty here, there's an active interest in keeping original IP alive.