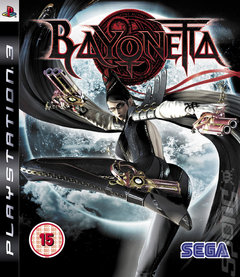 Fly me to the moon! It appears that Platinum Games' arse-kicking witch, Bayonetta, is going to be hopping universes and making a presence in the upcoming brawler Anarchy Reigns.

Japanese magazine Famitsu has spotted the sultry heroine strutting her stuff in the game - and she'll be playable too. In order to unlock her, you'll need to pre-order the game. At least, you do in Japan, where the game is called Max Anarchy. No word on whether pre-order bonuses are a part of the plan in the West.

Bayonetta isn't the only Platinum Games star to feature in Anarchy Reigns, though. Jack and the Baron, characters from MadWorld, also appear as playable characters. The game will be released this Summer.
Companies: Platinum
Games: Anarchy Reigns Bayonetta

RAUL 22 May 2012 07:33
1/1
</a>IMO the voice acting was rlleay corny, and I actually feel like I liked MGS4 s graphics (the look and style at least) much better. Sure Raiden has more detail in his model, but idgaf, Raiden in MGS4 had that epic unsung hero aura around him. Now he just seems like some random character with corny catch phrases. I don't rlleay care too much about his story because I liked the mystery about him.Wouldn't it be funny if in MGS5 they delve into Raiden's past a little bit and completely ignore the events of Rising? Actually, I hope they do.I'm not against the game, or its multiplatform state (just wanted to say that because from a lot of comments I get that angry vibe about how it could have been better if it was only on a ps3). IMO Kojima makes the games great, and his storytelling would be much better than any other dev that just came on to make one game. I hope it does turn out to be amazing, but judging from the trailer it doesn't seem to have that wow factor. Gameplay seemed like a God of War type of fighting.VN:F [1.9.15_1155](from 1 vote)
Posting of new comments is now locked for this page.