More games in the series to come. 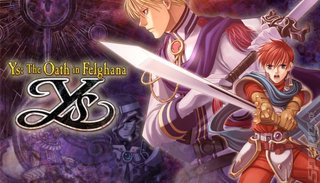 Remember the Ys series? No? Get educated, son/daughter. The Japanese role-playing franchise has been kicking since the late 1980s, and today you can re-acquaint yourself with the 2005 remake of 1989's Ys III: Wanderers from Ys (renamed as The Oath in Felghana) on Steam.

The remake, an action-based dungeon crawler that sees your hero overcome traps and solve curious puzzles, was originally released in Japan some seven years ago on Windows PCs. A PSP version was released on PlayStation Network in Europe back in January 2011, but today's Steam release is the first time the original PC edition has been seen in the West.

Because its on Steam, developer XSEED has taken advantage of all the little quirks of Valve's gaming platform, including online leaderboards, Achievements and Cloud support. And more games are planned, with the studio already announcing that 2006 series prequel Ys Origin will be the next game to see a Steam release.
Companies: Nihon Falcom XSeed
Games: Ys III: Wanderers from Ys