Take that Anne Robinson... is what EA doesn't say 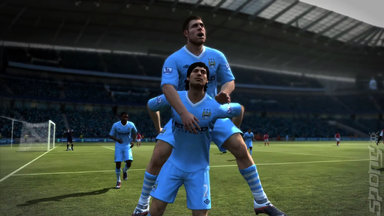 Electronic Arts ran into a bit of a problem on British TV as FIFA 12's Ultimate Team was savaged by the Watchdog consumer affairs show. The problem was that gamers disconnecting accidently were seeing wins registered as losses. This meant that microtransactional cash spent on pimping teams was being thrown away like a Chelsea managers sign-on fee by an oily-garch (sic).

EA has responded on the Watchdog site as follows:

"Our team is fully aware of the disconnect issue with FIFA Ultimate Team 12. Our customers let us know directly through player feedback in our forums in October.

"The issue was associated with certain types of router hardware that resulted in very small but important pieces of data being blocked at the conclusion of a game. It proved to be very a challenging engineering problem, even for the FIFA team - one of the best engineering teams in the industry - and extremely hard to resolve.

"The team immediately tried to reproduce the issue so they could troubleshoot and deploy a fix. As we often do, we turned to our fans to help, and we proactively asked them to send us the information they were receiving when getting disconnected. That forum thread solicited almost 3,000 responses from fans, and more than 200,000 views. You can see the thread here: http://forum.ea.com/uk/posts/list/1132741.page

"More than 120 hours of programming time in the FIFA studio were invested to narrow down and ultimately resolve the issue.

"Based on our estimates, 0.4% of our FIFA Ultimate Team 12 customers have been impacted on the PlayStation 3 and PC platforms.

"We confirm that no Xbox 360 players were impacted. Our team has tested that scenario multiple times - and that specific disconnect issue is not happening on the Xbox 360.

"The players you mention may be encountering things like signal loss with their internet provider, or a need to reset correct date and time or reboot power. Could also be a question of checking their server or testing with a different name/account.

"Action
"On March 13-14, 2012 we will be deploying a patch to FIFA 12 that will end the disconnect problem. We announced this to our fans on March 9 via our forum, web site, and other communications channels (http://www.ea.com/soccer/news/details-fifa12gameupdate-01). We understand that the wait has been frustrating for many of our loyal fans.

"Players who were most severely impacted experienced a major disruption to their game experience. We will be compensating those people with FIFA Ultimate Team packs and coins significant enough to demonstrate just how thankful we are that they stuck with us while we tackled the problem.

"Of the six customers initially identified by Watchdog, three were already in our system as being adversely affected by the FUT disconnect issue. We are currently gathering information for the other three (including the additional one sent to us on March 9th), and if warranted, they too will receive compensation.

"These actions and communications are testament to our commitment to our players and their game experience."

PaulRayment 16 Mar 2012 11:28
1/2
It was such balls. The tone seemed to imply that asking players to spend money on virtual items was some how wrong.

It still surprises me the way games are portrayed on mainstream TV.

Foda420 16 Mar 2012 14:01
2/2
This report was somewhat disappointing in all honesty. The report highlighted a fairly insignificant issue when compared with the other problems going on with UT.

If they really wanted to do some investigative reporting they would have brought to light the fiasco that is Hacking and EA's customer service. The leaderboards are essentially a target list for any unscrupulous people trying to obtain coins and high value players through illegitimate means. They use the information from the leaderboards (team name and gamertag) and contact EA customer service and convince them that something went wrong and the account needs to be transferred to another email address. Often times this is done without needing the original email address or any other type of verification.

The truly infuriating part of all this is that besides the fact that it's EA giving out the details to the hackers, but many of the players whose accounts have been compromised are never compensated for their loss. Users spend real money and invest many hours in building their own "Ultimate Team" and then EA gives out their personal information and drags their feet when it comes time to atone for their mistakes.

This disconnection issue really is only the tip of the iceberg, there is TONS more to be uncovered here, just requires a bit of digging...