Yes... another old idea is rehashed. 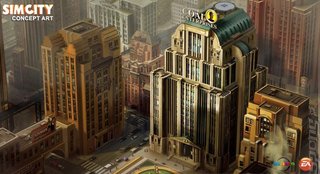 Electronic Arts and Maxis are brining a new version of Sim City to the PC via digital download and EA's Origin store/hub/social meeting place... yes, shop.

Yes, in a move aimed at the age and demographic of gamers who remember fondly the old Sim City, the "franchise that laid the foundations of the city building simulation genre is back, empowering players to create the world of their imagination!"

The old game will come back in 2013 in some new clothes but for PC only it was "revealed" at GDC last night.

Lucy Bradshaw, Senior Vice President of EA's Maxis Label went in for the big sell with, "We'd like to thank the millions of fans who have helped make SimCity synonymous with the city-building genre. This is a franchise that means the world to us at Maxis and we're happy to be bringing it back home where we are reimagining it for an entirely new generation of players". Yes she did dig out the tired old cliché of 'reimaginig', which given the age of the game is appropriate.

She added, "Using our proprietary GlassBox Engine, SimCity for PC will equip players with the tools to play the most sophisticated simulation of its kind. We are dedicated to making sure the experience - no matter the platform - has the fun, flavour and playability that has been intrinsic to the franchise since its birth."

We're a little confused as to what the 'no matter the platform' tease might mean. Our guess is Mac and iOS devices will role out too. The 2013 version "marries next generation accessibility and a robust multiplayer mode", of course.