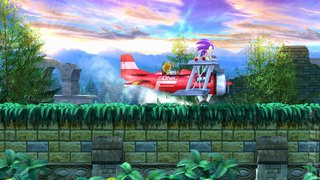 SEGA has released a gameplay trailer for the next chapter of its episodic downloadable Sonic adventure, Sonic the Hedgehog 4: Episode II. It features a pretty rocking remix of the Sonic & SEGA All-Stars Racing title theme, as well as some rather nostalgic platforming action.

As we've previously seen in still screens, the stages that Sonic and Tails will be rolling around in range from carnivals to snowy peaks and underwater gardens - tapping elements from classic games Sonic the Hedgehog 2 and Sonic 3 & Knuckles. There's even some Marble Garden-esque bumpers that open doors when you spindash onto them.

A sneak peek at the combination moves that can be performed with Sonic and Tails can be seen in the trailer too - one of which being a pretty cool double spin attack. Watch the trailer below.