The industry is going to fall apart! 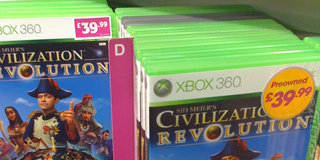 Here we go again! Jameson Durall, a design director at Volition, is the latest developer to stir the pot in the ongoing playground argument surrounding the pre-owned market. He reckons that any blocking of second-hand games on next-gen consoles would be a "fantastic" thing, and that the industry will "fall apart" without the eradication of trade-ins.

"I think [console blocking] would be a fantastic change for our business and even though the consumers would be up in arms about it at first they will grow to understand why and that it won?t kill them,? Durall writes on his blog.

"The system is already there for Microsoft, all they?d have to do is use the DLC and codes model they have to tie a game to your Xbox live account. Each retail disc would likely need that unique key somewhere in the code so the account would be able to link it properly."

He writes a lot more about the idea - including how such an idea actually has its flaws and that it would need to be more like a rental system - but then makes an impassioned plea that's not unlike every "starving artist" plea made by every developer before him.

?I fully believe that we have to do something about these issues or our industry is going to fall apart,? he writes. ?People often don?t understand the cost that goes into creating these huge experiences that we put on the shelves for only $60.

?They also don?t seem to realize how much they are hurting us when they buy a used game and how pirating a copy is just plain stealing. Maybe something as simple as educating them could help solve the problem.

?I know that some will say I?m not considering the retail games stores and the impact something like this would have on them?but remember they were doing fine well before the used games market became such a staple of their business. The truth is, they aren?t concerned with how this business is affecting us so why should I care how these changes will affect them?"

What are your thoughts? As always, comments box below.
Companies: Volition

Users don't moan that they can't trade in download titles.

headcasephil 7 Feb 2012 13:06
2/3
i think sony microsoft and nintendo should look how steam do things

MRXBOX n VAN BC 20 Feb 2012 22:46
3/3
They need to do something or they will Ruin Every Single Player , Masturbater !! Games like Fall Out or Mass Effect . They will ruin a good Single Player game with Multi player after thoughts . This is why all good single player games are giving you a reason to hold onto your copy longer . You now have a Multi play experience which will compel you to want to keep it . Or you will have 2 Disc 's that are half ass'd and not worth the plastic they CUM On !!! YA PUN INTENDED !!!
Posting of new comments is now locked for this page.