When the sheep hits your eye like a big pizza pie... 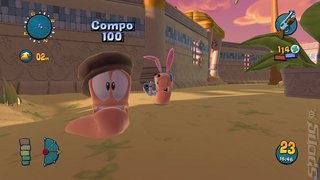 What's the best thing to give a loved one this Valentine's Day? How about Worms? Team17 has announced that its 3D cartoon warfare compilation, Worms: Ultimate Mayhem, will see a release on PlayStation Store on 14th February in the US and 15th February in the UK.

The game is a re-imagining of Worms 3D and Worms 4: Mayhem, which took the side-scrolling turn-based battler into the third dimension. Various improvements include additional single-player missions, worm customisation options and a revamped online multiplayer mode.

It'll launch on PSN for the sum of Ł9.99 of your British digital money. A PlayStation Plus discount is planned. If you don't fancy the PSN version, the game is already available on Steam and Xbox Live Arcade.
Companies: Team17
Games: Worms 3D Worms 4: Mayhem