UK and US-based hedgehog parties taking place over the summer. 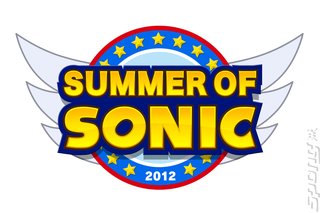 SEGA has announced a double-whammy of Sonic the Hedgehog parties that will take place this summer. First up will be the continuation of fan-organised and SEGA-sponsored UK convention, Summer of Sonic, while the second sees the return of an American SEGA-hosted party called Sonic Boom.

Summer of Sonic, created and led by SPOnG's very own Svend Joscelyne, will be in its fifth year - it's an "all-day event that celebrates all aspects of the Sonic franchise," and has grown from a grass-roots convention to one of the biggest dates on the Sonic fan calendar. SEGA announced that the event will take place in the London area, on Saturday 7th July 2012. Get booking those holidays.

Sonic Boom is an evening of hedgehog-based entertainment that was created and organised by SEGA of America. Last year's debut event took place during the trade-only E3 show, but for 2012 it was confirmed that Sonic Boom will be taking place in San Diego during the San Diego Comic Con. SEGA has advised that hotels fill up quickly in the area, so if you plan on going you better book it all now.