Game beaten by music... no DLC for Adele though 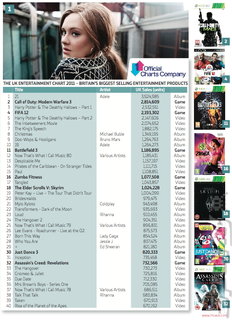 Image courtesy of MCV
What? It appears that in the UK at least Call of Duty: Modern Warfare 3 was not the biggest entertainment property for 2011. It was second. Ace songstress Adele was first with her long-playing beige, bland-o-disc, 21.

This is according to the Entertainment Retailers Association (ERA) which compiles the figures and is referring here to unit sales and not revenues.

MCV points out that, "It is important to stress, however, that the music data includes sales of digital products. Games digital sales are still not tracked. Who knows where Angry Birds may have come?

The number of games in the Top 40 has dropped year-on-year. There were nine games in 2010?s chart, but only seven this year. However, five games sold well over 1m units."