First for Call of Duty Elite Premium Members, on Xbox 360. 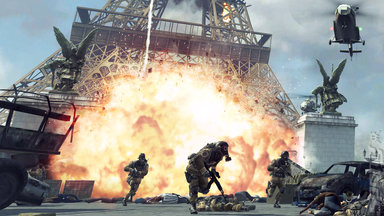 Activision has declared that its Modern Warfare 3 DLC schedule kicks off for members of the Call of Duty Elite service on 24th January. The first add-on to be released will be a map pack with two new battlegrounds - Liberation and Piazza.

With a press release that assaults the eyes with an abundance of capital letters and grandstanding vernacular, the publisher has boasted that at least 20 "content drops" will be made on Xbox Live between the kick-off date and September, and will feature maps, Special Ops missions, new games modes and more.

Downloadable content will be available first for Premium members of the Call of Duty Elite subscription service, and will also land on Xbox 360 before other platforms. No release dates were given for PlayStation 3 or PC versions of the DLC service. Seems a bit rubbish, if you're a paid Elite member without an Xbox.

Five download packs will be made available on three occasions in January, February and March, according to the press release, with the first two consisting of new multiplayer maps. Here's a brief description of what each of the new maps coming at the end of the month will involve.

"Liberation is a vast, militarised landscape, ripe for long-range sniper and LMG fire, with mounted turrets on either end that lend power to anyone brave enough to expose themselves in exchange for deadly firepower. Piazza is the idyllic Italian getaway that is anything but, where tight corners and branching pathways pose great risk at every turn. Close-range combat dominates in Piazza, where attacks from behind, above and below are an ever-constant threat."
Companies: Activision
Games: Call of Duty: Modern Warfare 3