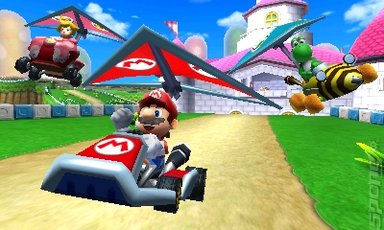 Anyone would think it was the Nintendo 3DS that launched last month in Japan, not the PlayStation Vita. Sony's technological wonder-handheld continues its downward spiral on its third week on sale, while its stereoscopic rival benefits massively from a slew of chart-topping software hits. Mario Kart 7 and Monster Hunter 3G both sold over 100,000 units this week alone.

3DS games dominate the Japanese Software Top 10, with Super Mario 3D Land, Inazuma Eleven and Gundam making up the rest of the five titles on rank. The result is a staggering 197,952 unit sales for Nintendo's handheld. The Wii has also caught something of a software revival, taking command of the latter half of the chart. This hasn't translated to a huge surge in hardware sales, however.

For the most part, Sony is doing okay - the PS3 is leading the home console chart by a large margin, far outpacing the Wii's weekly figures, and there's a good number of PS3 games in the chart. The PlayStation Vita, on the other hand, has a distinct lack of games in the Top 10, and its hardware numbers have sharply dropped for a second-week running. We reckon Sony is counting down the days until Capcom is ready to release a Monster Hunter game on the system. Then the fun really begins.

Vanessa 24 Feb 2012 05:08
1/1
I can't help but think that this widdeng is one of the greatest things to happen of the decade. Best wishes to the happy newlyweds and any one that doesn't agree is a killjoy.
Posting of new comments is now locked for this page.