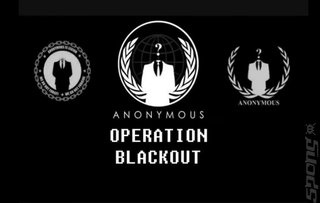 The group is up in arms about a large content producer siding with an anti-piracy Act (no matter how flawed that Act is, and it is) and has issued the following warning:

?Hello, SONY.
?We are Anonymous.

?It has come to the attention of the Anonymous activist community that you have chosen to stand by the Stop Online Piracy Act. This act will halt online businesses and restrict access to many sites for many users. Supporting SOPA is like trying to throw an entire company from off a bridge. Your support to the act is a signed death warrant to SONY Company and Associates. Therefore, yet again, we have decided to destroy your network. We will dismantle your phantom from the internet. Prepare to be extinguished. Justice will be swift, and it will be for the people, whether some like it or not. Sony, you have been warned.

?To those doubting our powers. We've infiltrated the servers of Bank of America, The United States Department of Defense, The United Nations, and Lockheed Martin. In one day.

?For their approval to SOPA, we have also declared that our fury be brought upon the following persons. Justin Bieber. Lady Gaga. Kim Kardashian. and Taylor Swift.

Yes, you read that right; a major act of political hacktivism is to be wrought on ?Justin Bieber. Lady Gaga. Kim Kardashian. and Taylor Swift.?

Must make the freedom riders of the Civil Rights movement feel silly about all that standing up to gunfire, teargas and general brutality.

Don't get me wrong I don't agree with SOPA, I just think there's a better way to go about it, that keeps innocent people out of it, they say they're fighting "for the people" but pissing them off is not the way to gain their support.

general user 5 Jan 2012 11:27
7/8
@Daz
wow you have no clue what is going on around you do you i keep reading about how people cant connect to psn its time to stop crying about your ps3 and get your head back in the real world its not just SOPA do some reasearch about what is really going on in THE REAL WORLD and comeback if you think there is a better way then lets hear it as long as you are sitting infront of your computer or ps3 waiting for it to connect then you are a part of the problem and therefor NOT INNOCENT

JoelerBo 9 Jan 2012 04:29
8/8
I am a cheater on Warhawk for Playstation 3. I watch youtube video tutorials on how to do so! I recently bought PS3Magic to put Yellow Dog Linux onto my PS3 so I could do exactly what those people you mentioned are doing! Unfortunately if you've gotten the most recent updates (everything after Update 3.55, I have 4.00) Sony has removed the ability to mod them. I cheat for the same reason anonymous hacks websites. Because it's funny!
Posting of new comments is now locked for this page.