CAVE exec "can't approach it on a business level." 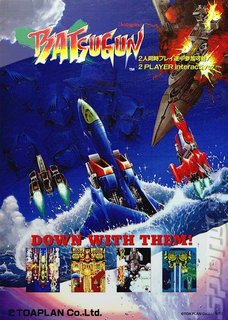 The CEO of Japanese bullet hell studio CAVE has revealed that it does not intend to look into re-releasing the back catalogue of his previous company, Toaplan - scuppering any chance of classics such as Batsugun and Truxton II from getting HD remasters.

In an interview to be published in full later today, company executive Tsuneki Ikeda - who was solely responsible for the development of Batsugun and has been directly involved with CAVE since its establishment - said that while he still has some feelings for the retro shoot'em ups, he can't consider re-releases from a business perspective.

"You know, to be blunt... as a company, it?s not something we?re looking at," he told SPOnG. "Obviously I have certain feelings about the games that I worked on - certain things I?d like to do with them and whatnot, but that?s not something that I can approach on a business level. So in that sense right now it?s not in any of our plans."

Ikeda does clearly have a lot of emotions for the games he created - one of them being embarrassment! "When I look at the old games I?m so embarrassed, I feel like I want to die," he laughs. "When I go to the arcades and see the old games running there, I just want the electricity to switch off! Seriously, I don?t want to deny that stuff in the past, but for me it?s just really embarrassing. There was so much I didn?t know at the time, that I can see when I?m playing the game."

One of the games under Toaplan's development was the infamous Mega Drive game Zero Wing. Stay tuned for the full interview later, where Ikeda reminisces over the "All Your Base" internet phenomenon and CAVE's history.
Companies: Cave Toaplan
Games: Batsugun Truxton