NeverDead Coming to Europe in February

Things get hellish next year. 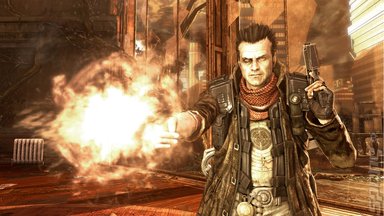 Konami's demonic, head-rolling action brawler NeverDead has been given a European release date. The game will launch for PlayStation 3 and Xbox 360 consoles on 3rd February 2012.

Developed by Rebellion Software and the product of Metal Gear Ac!d's Shinta Nojiri's warped mind, NeverDead is the hellish misadventure of demon hunter Bryce, who is cursed with immortality. You'll be shooting and fighting your way through waves of evil minions, all with a desire to hack Bryce to pieces.

As you get torn apart by larger and meaner demons, Bryce's body parts go flying off limb by limb - leaving you handicapped until he can run over and put himself back together again. Bits of Bryce can be used as impromptu weapons if need be, and even his head can be detached to roll around small areas.

"For NeverDead, we?ve gone all out to change the approach the player takes in battle," said Nojiri. "Losing a limb is a mere inconvenience and Bryce?s physical skills allow a wealth of ways to take out the enemy ? from close-range combat, to throwing limbs into clusters of monsters and shooting them remotely!

"This adds a level of humour to the game that brings the world-weary main character to life, while players can revel in game worlds that can are fully interactive and eminently destructible."

Looks like this coming Spring is going to be jam-packed with games again. Let the good times - and heads - roll.
Companies: Konami Rebellion
Games: NeverDead