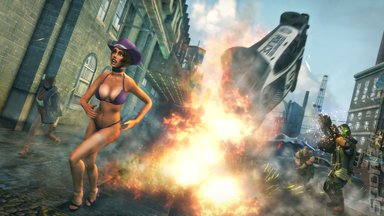 Hot on the heels of news that Saints Row 4 is in the works, series senior producer Greg Donovan has indicated to SPOnG that Volition may speak to UK independent retailer Grainger Games for a sending up, or even some sort of "partnership".

Grainger Games caused controversy at last month's Games Media Awards as its primary sponsor, by inviting dwarves and bikini girls to the event by hummer and showering attendees with branded condoms. Representatives got drunk and heckled winners throughout the night, amongst other allegations. Intent Media managing director Stuart Dinsey blacklisted Grainger Games from all of its events the morning after the event, following industry gossip and anger on Twitter.

At a recent press event showcasing Saints Row The Third, SPOnG asked Donovan if it would entertain making a parody of the night's events in a future game. With a chuckle he replied, "I heard about what happened at that event. That was really weird, man. I?m not familiar with the company, I hear it?s a small independent retailer? But sure, if there?s going to be a Saints Row 4 we?re always willing to talk about partnering and things like that for sure.

"It?s not out of the ordinary for us to do that - I mean, we have Astro headsets in Saints Row The Third, and that?s a real headphone brand. If... the whole Grainger Games thing fits, then we?d absolutely look at it. It might be an ironic partnership, but you know [laughs]!"

Good job there's a Saints Row 4 being made then, eh readers? Steel yourself, games industry.