Guess who's back. Back again. 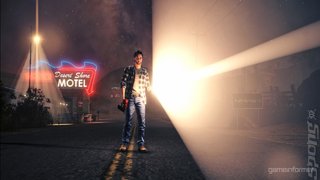 Oh look, Alan Wake's back. Remedy and Microsoft recently let slip that a sequel was in the works, ahead of a Spike TV Video Game Awards reveal due next month. Now we get to see the first screenshot from the game, titled Alan Wake: Night Springs.

The image, courtesy of Gameinformer, shows that Wakey's still not overcome his fear of shadowy creatures (and possibly his own subconscious). He's stood out there in the dark with his trusty torch, outside of the Desert Shore Motel.

Our Alan also seems to have become a games journalist since the events of the previous survival thriller, as he's changed up his jacket for the games hack ensemble of chequered shirt and jeans that appear fresh from the washing machine. I wonder if he's in the middle of writing a 3000-word diatribe about the deep social commentary that lies within Noby Noby Boy as well?

Well, I'm just rambling now, so have a look at the screenshot up there. Microsoft has previously said that this will be a digital-only release on Xbox Live, but Remedy has added that the project is being treated like a full release.
Companies: Remedy
Games: Alan Wake