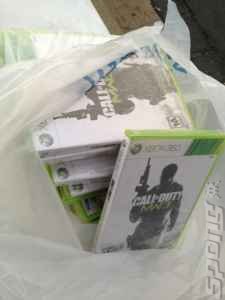 Copies of Modern Warfare 3 have gone on sale in the US, days ahead of its November 8th release. Microsoft, for its part, is being a little muddy on the subject of what will happen to people caught playing the game early.

Kmart stores in the US apparently received shipments of the game with incorrect release date information. While it appears that most of the stores have been alerted to the mistake and haven't sold the game, it is known that it has been sold from an outlet in Tampa, Florida.

Copies are now available on eBay and Craigslist at highly inflated prices.

For those worried about getting an Xbox Live ban, however, don't necessarily expect a clear policy from Microsoft. "For those asking about MW3 pre-release play: If your copy is legit and obtained legitly, have fun. It's a great game", tweeted Stephen Toulouse, Xbox LIVE Director of Policy and Enforcement. He followed up, however, with "clarification: dblchk'd with Activision. Mw3 pre-release play not authorized. So pls be patient. Playing early may impact your account!"

He doesn't say, however, in what way early play may impact your account.

Nathen 4 Nov 2011 11:10
1/7
Major nelson shouldn't of said the Go ahead and play the Game thousands of people could of Came off there computers and went straight on it. Not fair at all.

deleted 4 Nov 2011 16:47
2/7
So the consumer is punished for the retailers mistake!
more comments below our sponsor's message

Derek3498 5 Nov 2011 02:47
3/7
its not the retailers fault if we got boxes shipped to us with the wrong release date that's the suppliers fault. (works at a kmart in pa DID NOT SELL ANY COPIES) all the boxes my store got were marked properly,and if they weren't i wouldn't have sold them anyway. i know the law,and i know the release date.

Derek3498 6 Nov 2011 15:55
5/7
@Joe_Mac
the store involved will face a 50,000 fine + 5,000 for each copy, and for those idiots that bought it early chances are their accounts are going to be banned. unfortunately the stores get screwed because of a suppliers mistake.

Hey Derek, you a Dick much eh?