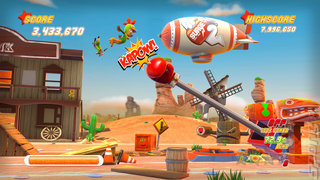 Sean Murray, MD of Joe Danger dev Hello Games, has responded to the anger of PS3 owners miffed that the developer's supposedly Sony-exclusive title will be hitting Xbox Live Arcade.

"It's always weird when what you perceive is an exclusive title goes to another platform," Murray told Eurogamer. "It's part of the culture. I used to be a Sony fanboy myself - not cut me in half and I bleed Sony or anything like that, but just, I quite like the XMB, and telling people, I quite like Blu-rays. That was me."

Calling Joe Danger something that gamers "perceive" as an exclusive might come off as a bit glib. The press release that announced Joe Danger for PSN back in March 2010 described the game as "a console exclusive", so it came as a bit of a surprise when Joe Danger: Special Edition (complete with almost double the content of the original) was announced for XBLA yesterday.

Murray did note that Joe Danger wasn't originally conceived for any one platform. "Before we managed to find a way to release Joe Danger on PSN, we didn't know what platform we'd be on," he said.

That said, dealing with Microsoft with a hit under its belt has helped Hello Games along. "I certainly know when we dealt with MS before right at the start of Joe Danger when we were originally doing it, compared to dealing with them now we've certainly found a different attitude and more openness," Murray noted.
Companies: Hello
Games: Joe Danger

irritant 4 Nov 2011 10:19
1/2
Would these people who are complaining not have bought the game if they knew it was on other platforms? This is simply a stupid response. "I don't want the makers of a game I really like to be able to make more money, I'd rather they risked having to pack up operations and never make games again."

Swedgen 7 Nov 2011 18:58
2/2
Seriously? What kind of deflection is this? I'm no Sony fanboy, but a PS3 is all I have and I loved Joe Danger. I couldn't care less about it going to 360, and I'm willing to bet most "Anger" stems from the fact that they're getting "almost double the content". There's nothing "weird" or fanboyish about that.
Posting of new comments is now locked for this page.