Rising Star Games does it again. 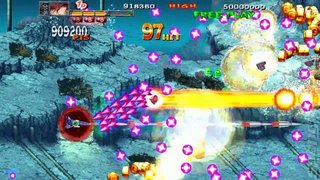 Cave fans are being absolutely spoiled right now. Not long before DoDonPachi Resurrection gets a boxed release on the Xbox 360, does Rising Star Games announce that it will also be publishing Akai Katana to the European market.

The announcement was made over the weekend at the MCM Expo event in London. Akai Katana has all the hallmarks of a classic Cave shooter, including countless scenes of bullet-hell loveliness. The game was originally released on the Xbox 360 in Japan, back in May.

It will be the third Cave shooter to get a release on the platform following DoDonPachi and Deathsmiles, and will come with the usual assortment of extra modes and graphical updates. It's pegged for a Q1 2012 release date for Europe.
Companies: Cave Rising Star