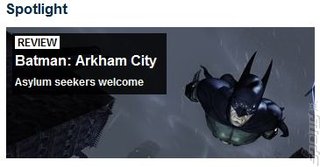 So, the highly rated Batman: Arkham City has bombed... all over FIFA 12 and everything else in sight, placing it at the top of the UK video games All Formats Top 10.

Chart-Track, which compiles the chart, says:

"It is by far the biggest ever launch for Warner Bros, selling almost double the launch week sales of the Eidos/Square Enix published predecessor ?Batman: Arkham Asylum?.

"It is also a great week for UK developers with ?Batman: Arkham City? developed by North London outfit ?Rocksteady Studios? and the next highest new entry ?Football Manager 2012? by Sports Interactive who are also based in London, only a few miles away.