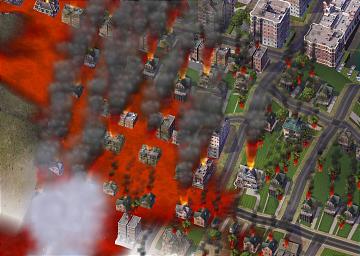 Herman Cain, Republican presidential candidate hopeful, has clearly been playing too much SimCity. The politician has revealed a '9-9-9' tax plan that mirrors the default settings in Maxis' popular strategy game - and publisher Electronic Arts has noticed.

Cain has been lauded for taking a simplistic, effective approach to his political strategy. As part of this, he recently declared that American citizens should expect to pay a flat 9 per cent each for corporate tax, personal income tax and national sales tax. The idea is claimed to have come from a bank employee called Richard Lowrie in Ohio, but some are drawing comparisons with EA's city-building game.

"While we at Maxis and Electronic Arts do not endorse any political candidates or their platforms, it's interesting to see GOP candidate Herman Cain propose a simplified tax system like one we designed for the video game SimCity 4," producer Kip Katsarelis said to the Daily Mail (what, no 'ban this sick filth?').

"As game designers we tried to keep taxes as a simple function of running your virtual city so the player can focus on having fun," Kip told Reuters. "The team here is glad that he chose to build a platform off of our tax system, but there are so many other serious issues in SimCity that I would love to see a politician construct a game around. Is anyone looking at an alien invasion plan?"

Forget that, Kip - we're waiting on Texas Governor Rick Perry to come back with a foreign policy plan based on Call of Duty.
Companies: Electronic Arts
Games: Sim City 4