Battlefield 3 Will "Put a Huge Dent" in Modern Warfare 3

DICE stopped itself from working on the game an extra year. 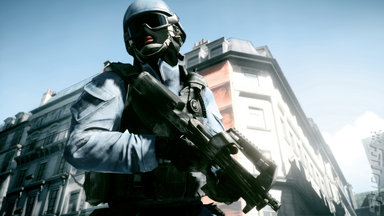 The biggest scrap of the gaming year is nigh upon us - and DICE reckons that Battlefield 3 has the chops to take on Activision's Modern Warfare 3, with the power to "put a huge dent" in its rival's share of the massmarket.

In an interview with SPOnG, published in full later today, DICE producer Patrick Liu said that the studio was first and foremost looking to create the best game it could. He also had a lot of praise for Infinity Ward and Sledgehammer's upcoming sequel, but then got a bit sporty.

"From what I?ve seen of Modern Warfare 3 it looks great, as usual. I think we're going to put a huge dent, so to speak, in [Activision's] market," Liu said. "But they?re a behemoth. It?s not easy to move them... although I believe that we have already done that, with Battlefield 3's campaign so far.

"But at the same time, from a developer standpoint, we really focus on creating our own game and making the best that we can. We set the bar quite high for ourselves, and that?s usually the biggest challenge for us."

Liu added that part of that challenge is self-restraint, noting that DICE could have spent an extra 12 months on development if it wanted to. "I know that the game is never actually done - we can always improve the game. We have lots of ideas on how to improve this, so if we could we would push Battlefield 3 back a year or two maybe. But that wouldn?t make any sense. So the biggest challenge is really our own requirements for ourselves."

Xbox Live09 10 Oct 2011 14:17
1/5
Not going to stand a chance. Have they seen how much detail Modern Warfare 3 put into the Redemption Trailer? It just drove everyone into the number 1 product on the wishlist for christmas. So much more improved than I personally thought MW3 would have looked like. Yes Battlefield 3 is going to be beyond an amazing game this year. BF3 have time to make comeback to MW3. Superciliously I honestly take the opinion of IGN, GameSpot, and G4TV that MW3 has recaptured their fans back. Modern Warfare 3 has brought life to an armaggedon hell-breaking epic game.

jacob 10 Oct 2011 14:51
2/5
bf3 will destroy cod because every bf is defferent but all of the cods are the same and becoming very boring!
more comments below our sponsor's message

Downranger 10 Oct 2011 19:57
4/5
"although I believe that we have already done that, with Battlefield 3's campaign so far" - what a joker. the BF3 campaign copied the COD formula and explicitly used the black ops story telling. DICE should not use dent but holes because they are good at this.

headcasephil 11 Oct 2011 21:20
5/5
i think bf3 would have a chance if ea had put it on steam with the fact that 90% of pc gamers us steam i think there stupid not putting it on it
Posting of new comments is now locked for this page.