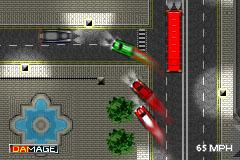 All Images (4) »
We have received the first shots from the Game Boy Advance version of Digital Worldwide?s Midnight Club, the street racing game originally created for PlayStation 2.

The game was a respectable first-generation PlayStation 2 title and brought a good fix of mission-based racing soon after the console?s launch, something that has to be respected.

The GBA version, developed by UK-based Rebellion, is looking really nice as you can see from these screens. When we saw the game at an earlier stage, we were impressed with the speed at which it moves. You absolutely blister the tarmac in any of the cars that featured in the PS2 version.

The handling, it has to be said, is the best we have ever seen on a top-down driving game. Most games, especially the GTA series, had a really rigid feel. Midnight Club features really pleasing slides with various amounts of under/oversteer. This is the way forward.