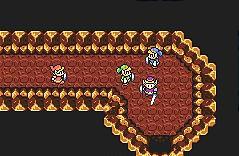 Ain't no party like a co-op Zelda party.
3DS and DSi owners finally get an actual bargain this week now with the announcement of the release of Legend of Zelda: Four Swords Anniversary Edition. Rather than paying over the odds for something like Cut The Rope, you'll be able to pick up one of the finest Zelda games for the princely sum of absolutely nowt.

As part of the celebrations for the Zelda games 25th Anniversary the game will roll out for download later this week. Like the original GBA version you can play Four Swords with up to three other players but the new edition of the game also allows for solo play. Well, we say 'solo': you actually control a pair of Links as you quest about Hyrule once more to take down the evil Ganon.

The original was a cracking little game and Anniversary Edition promises to be more of the same. The addition of the solo mode is particularly interesting but to get the best experience you really should get together with others to try out the full co-operative extravaganza. If Nintendo stick to their normal schedule you should be able to grab it this Thursday.
Companies: Nintendo
Games: The Legend of Zelda: Four Swords Adventures