Sober response to fans wanting a bit of WiFi action. 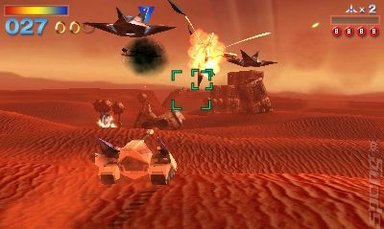 Surprised that Nintendo wasn't able to cram in an online multiplayer mode for Star Fox 64 3D? Well, the company has taken the time to explain why - and it's the age-old 'budget and time constraints' line.

Development co-ordinator Yusuke Amano was cornered by Official Nintendo Magazine and explained that the goal was to release the game as close to the 3DS' launch window as possible. Star Fox 64 3D represented a showpiece of the new handheld's stereoscopic capabilities, he added.

"For this project what we needed to do was use Star Fox to provide users with a game that shows the appeal of Nintendo 3DS as quickly as possible," Amano said. "We put a lot of effort into the graphics, and if we had included online support then we couldn?t have reached this level in the time allowed."

If the game was to get an online mode, he said, then it could resulted in "vast" development costs. We're guessing Nintendo's not too keen on spending too much money for a remake of a 14-year old game, understandably.

SPOnG reviewed the game and gave it a rather glowing commendation - despite the fact that our David bemoaned the lack of online play. "Nintendo just doesn't seem to care about online play and when a little multiplayer game like this doesn't have online features, it just makes you question whether we'll ever see Nintendo join the online world properly," he sagely wrote. You can read our review here.
Companies: Nintendo
Games: Starfox 64