Excited about Devil's Third? You'll be waiting some time... 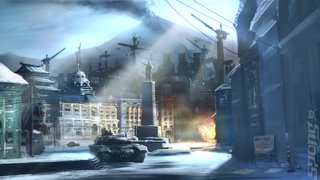 Not many folks about for a third person shooter...
Tomonobu Itagaki has revealed a few more details about his latest project Devil's Third in an interview with Japanese site Impress Watch. The third person shooter, due out in early 2013, seems to have a focus on the Kessler Effect; probably the first game ever to deal with the increasing problem of space debris.

As more and more bits crash into each other in Low Earth Orbit, satellites become less useful, IT systems will fail and air travel will come to a halt. With the game beginning as this worldwide disaster is just starting it certainly appears to be an interesting concept. Actual scientific theory in gaming always makes for an intriguing time.

Along with a single player mode there are plans for 'different' multiplayer games for up to 32 gamers. Itagaki also mentioned that he's not yet managed to get to this lofty height yet as the maximum that he's had working is 25. However, there's plenty of time. A beta test is currently planned but it won't be for some time - at least late Autumn 2012

Itagaki has also commented on the announcement of Dead or Alive 5. Seemingly unaware of it, he said "It was announced? I still haven't seen it myself, so I'm not in a position to comment." A bit of a strange thing to say but he believes that the series is in good hands and that it's not odd to continue the series without his input. In fact, he compares it to a father giving away a daughter to be married. We suppose that if you truly love something, it's best to set it free...