The prettiest game ever made? 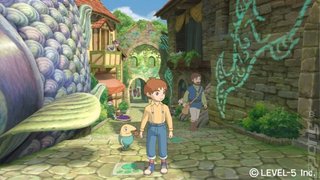 So very lovely
When the World's Greatest Animation Studio announces that it's collaborating with one of the greatest RPG creators out there, you'd better shut up and start listening. Studio Ghibli, makers of classics like Howl's Moving Castle and Spirited Away, announced waaay back in 2008 that it was partnering up with Level 5 (who develop the Dragon Quest series amongst many other quality titles) to make a game... and it's beautiful. And we're going to see a HD version of it on our screens in the not-too-distant future.

Ni No Kuni PS3 is due out in Japan this November - the original DS version was released last year - but there's even better news: it's getting a western release under the title The Queen of White Sacred Ash). American gamers will be able to pick it up in "early 2012" on PS3 and as the system's games are region free, we're now looking at what's basically a worldwide release.

You play as Oliver, a young lad who is transported to the parallel world of Ni No Kuni to resurrect his recently deceased mother. Accompanied by Shinzuku (a male fairy), it's an RPG that promises to be something truly special if only because it's such a legendary collaboration. If you want some proof as to how pretty it is, see for yourself below.