For England! And everywhere else, of course. 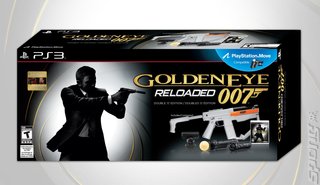 You could fit Robbie Coltrane in that box
GoldenEye 007, the classic Nintendo 64 shooter, is making yet another return to the modern console arena. Following the release of a well-received remake for the Wii, the game is now being remixed yet further for the PS3 and 360, and owners of the Sony machine will be able to pick up a pretty amazing looking bundle.

Designed for regular play as well as Move, the GoldenEye 007: Reloaded Double '0' Edition will come packed with a PlayStation Move and NavCon combo, the PS Eye camera and the awesome Sharp Shooter peripheral. While it may look like a Nerf gun, the Sharp Shooter is actually great to play with and incredibly accurate ? just what you need when you're running around Complex, relying on split-second decisions and a speedy trigger finger.

Built around an entirely new game engine, this latest version promises HD graphics, full online multiplayer and a whole new game mode: MI6 Ops. The characters we know and love from those late nights huddled around a tiny television make a glorious return though PS3 players also get a bonus: the never before seen Hugo Drax from Moonraker, complete with his laser.

While those who ploughed so many hours into the original game happily look back on it through rose-tinted glasses, there's no denying the importance of GoldenEye 007. Following the decent job done on the Wii version, we hope that this latest remake will drag us back to those halcyon days. Now, slappers on Temple, anyone?
Companies: Activision
Games: GoldenEye 007 GoldenEye: Reloaded

gingineer 15 Sep 2011 14:28
1/5
i'm thinking of getting move and looking for a bundle like this. has anyone seen any similar game and move bundles of any worth?

config 16 Sep 2011 10:25
4/5
Need to snag me one of those Sharp Shooters. I really liked the Move+Nav control when I played KZ3, but as the Nav vanished shortly thereafter (I suspect a 2yo with a fascination with putting object in boxes/cupboards/bins) I was back to the pad for Resistance2, and I feel somewhat disadvantages in MP sessions (may be that's just 'cause I'm crap)

Question, though - with SS, do you have to stand to play? The heft of the controller suggests this, but would like to hear from those that have used it.

Michael Fox 17 Sep 2011 21:35
5/5
I've used it with SOCOM: SF and it's grand sitting or standing. Sure, standing's probably easier as you've got more freedom of movement, but meh... play how you want to play!
Posting of new comments is now locked for this page.