Development depends on the success of XBLA remake of original. 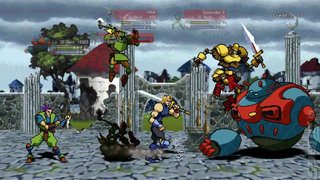 In possibly the biggest news to come out of Tokyo Game Show, shoot'em up superstars Treasure has revealed that it intends to create a sequel to SEGA Saturn masterpiece Guardian Heroes.

Treasure's Hiroto Matsuura said that the upcoming Xbox Live Arcade remake of the 1996 classic originally "started as Guardian Heroes 2, but the publisher [SEGA] said in order to create a sequel, they wanted us to revitalise the IP. So instead we made a remake."

Matsuura-san added that the team behind last year's Sin & Punishment sequel on the Wii had a desire to make a sequel, but the remake itself is being handled entirely by himself. Any potential sequel would stay true to the original's roots, he hinted; "The original core game mechanics is a 2D, layer-based game, and that's what we like about it. We may create characters and backgrounds in 3D, but the core mechanics will be the same."

How gaga would you go for a sequel to Guardian Heroes? We would literally be bouncing off the walls - let us know how you feel in the comments box below.

Mr.H 21 May 2012 09:59
1/1
Hello. Growing up in the 90's Guardian Heroes was one of my all time favorite games. My brother actually purchased it not knowing what it was. he looked at the screen shots on the back of the game cover and read the description and thought it might be fun... Fun, was a severe understatement. This game never gets old. the only disappointing thing was that we were three brothers and the game is only two player co-op. We have always wanted there to be a second one. NOT including that crappy sequel on the game boy advance. Sorry no harm or insult meant for any creators, programmers, writers, etc. But the game was far too short. Made even shorter by the fact that all you had to do to beat it was choose the lightning character and spam the magic where the two lightning bolts spin around you and progress outwards. TKO everything. But a proper sequel would be freakin awsome. pardon the slang, and That comment does not reflect my true feeling about a proper sequel. but that is probably not appropriate for all.For YEARS I had been trying to emulate this game. As the game and our sega saturn both belonged to our brother and he took them with him when he moved out. So when I learned that they were releasing it for xbox, I practically crapped my pants (pardon my language) grabbed a calendar and began counting down the days till it came out. Had I not already owned an xbox before this came out I would have bought an xbox just to get this game. That's how GREAT this game is. no joke. so if they make a sequel I will be eternally grateful to all that had a hand in making it. PS. I heard that the creators of guardian heroes got together again and came out with a new game called code of princess. which according to Wikipedia just came out last month on April 20th I believe, in japan for the nintendo 3ds. now in general I am against the 3ds, not gonna go into detail thats another story. but long story short. If this comes to north america I WILL be buying a 3ds just to play this game. And I did watch some gameplay footage and whatnot so I know its legit and not some other game. It's exactly like guardian heroes... And that about sums it up. Thanks for listening... Sorry for the rant.
Posting of new comments is now locked for this page.