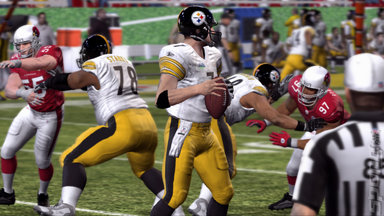 Drugs? Drink? No, Madden's at fault
Yet another story from the USA that infuriates and annoys right thinkin' folks. Take two angry guys, a metal rod with the word 'Dizzle' written on it in marker, a pile of booze, drugs and a copy of Madden 10. Someone gets killed and what does the focus land on? The video game, of course.

It sounds like a Jerry Springer episode gone very wrong but the sad truth is that this is entirely real. Prosecutors in a court case taking place now in Kansas has alledged that the defendant, Benjamin "Dizz" Redgate, battered his friend Luke German to death because they were arguing over a game. Redgate's brother Chris is also apparently involved after accusations of cheating led to a heated argument.

With an emphasis placed on the game rather than the drugs, drink or the defendants' history of violence, it's a little disturbing to read. Out of all the things that contributed to this terrible crime, what is surely the most innocuous aspect is being treated as a trigger. It seems that no matter what the crime, if video games are involved at even the smallest level, they're brought to the fore.