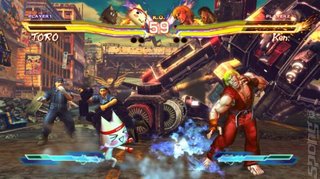 Capcom highly-anticipated Street Fighter X Tekken crossover just got that little more exciting this week, as the publisher released a new trailer ahead of Tokyo Game Show that shows off four-player simultaneous play.

A brand new gameplay mode, Pandora, is tied into the storyline and seems to send fighters into a frenzy when activated. The glowing purple haze was demonstrated on the game's revealed characters - Rolento, Ibuki and Zangief from Street Fighter, and Heihachi, Kuma and Lili from Tekken.

It was also announced that Toro and Kuro - the black and white animated cats that promote Sony PlayStation products in Japan - will be available as playable characters in the PS3 and PS Vita versions of the game. 'Mental' doesn't quite cover it.

Watch the video below and get excited, now.